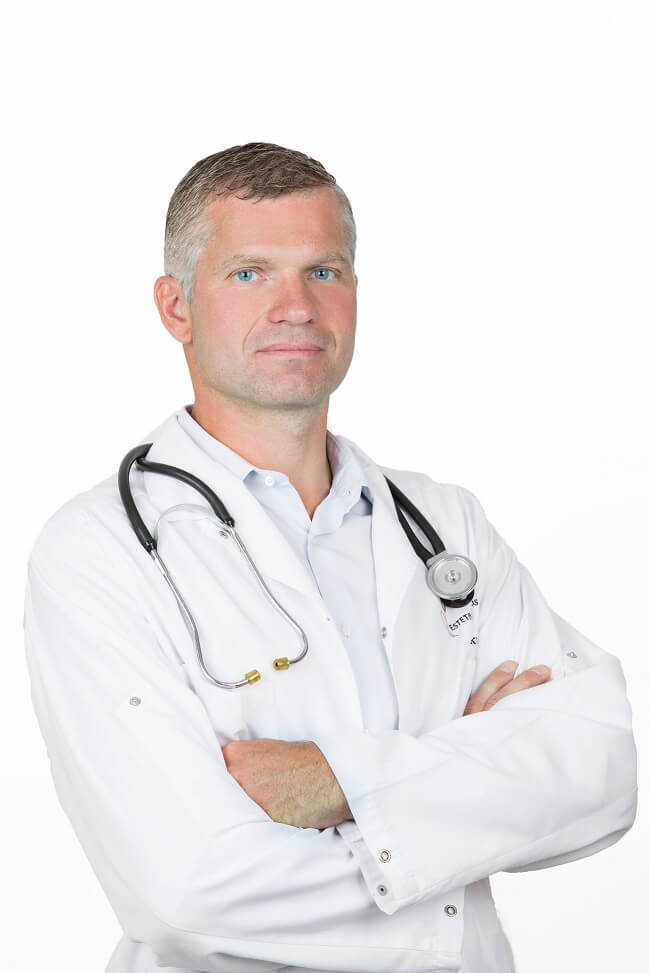 Want to ask something?

What is liposuction?
Liposuction is the procedure during which excess of subcutaneous fat is removed, thus, making the bodylines smoother and reducing their volume.

When may liposuction be performed?
Liposuction, as any other aesthetic surgery, may be carried out on a patient with realistic hopes, who is in good physical and mental health.

Does a patient need any special preparations before the surgery?
No special arrangements for this surgery are necessary; the patient gets a blood test, which is prescribed by the plastic surgeon during the consultation. By the way, if any dietary products have been used, the consumption of them must be discontinued.

What type of anesthetics is applied at the surgery?
Depending upon surgery volume and localisation, there may be local, intravenous, general, or spinal anesthesia applied.

How is the surgery performed?
Minor incisions are done in preliminary marked spots during the operation. Those spots are infiltrated by a special liquid mixture. Afterwards, the excess of subcutaneous fat is removed in feathery strokes via the same slits by using special cannula and a pump.

What is the risk of liposuction surgery anesthesia?
Liposuction is a low-risk surgery, it is important, however, to reasonably assess the amount of subcutaneous fat to be sucked out, also, not to apply several big surgeries at one time.

Can fat be removed from any area of the body?
No. Most common areas of subcutaneous fat accumulation are the abdomen, waist, thighs – inner and outer surfaces, inner surfaces of knees, upper arms, shoulders, pubis, and chin.

What happens in case the skin doesn’t shrink following large (excessive) abdominal area  liposuction. Is it considered as complication? What is the price of the correction?

Removal of excessive skin after liposuction is considered as a stage of surgical treatment offered and not a complication. It has to be covered by the patient. By planning 2 stages (if needed) we avoid long horizontal scar in your lower abdomen. If the shrinking of skin is not enough and we see it hanging, then we’d recommend miniabdominoplasty operation.

How much does this type of surgery cost?
The cost of liposuction surgery depends on the volume of surgery. Additionally, under the laws of the Republic of Lithuania, surgery indications only being of aesthetic nature, they are taxable by VAT tax (21 per cent of the surgery price is added to the final cost of surgery).

When do patients return to work after surgery?
It is usually a week patients must stay away from work.

When is the final outcome of the surgery due?
The final results are visible in two months after operation when there is a decline in swellings.

Is girdle a must?
Yes, of course, special compressing clothing must be worn after surgery for four weeks in a row to improve skin shrinkage.

What is the difference between abdominal liposuction and liposuction of flanks performed during the abdominoplastics?

Abdominal liposuction involves lower and upper area of abdomen though it is limited in volume because of the damage to vascular structures when combined with lifting and pulling of abdominal flaps and further risk of skin necrosis.
Liposuction of flanks could be quite extensive as it improves feminine waist, enhances buttocks contour and virtually eliminates differences between skin thickness below and above postoperative scar.

I want my flanks and abdomen area to be completely flat. Is it possible to avoid hanging skin?

In medicine nobody can give 100% guarantee as we are dealing with live tissues. We cannot remove all the fat from under the skin as you may get irregularities, hardening of skin, necrosis, etc.  The shape of the trunk greatly depends on the rib cage shape, underlying pelvic bones, abdominal muscles, overall volume of internal organs, existing hernias and general body constitution. The definition of „completely flat belly“ the patient and the doctor sees from slightly different perspective. However, we are always seeking for our patient’s maximum aesthetic result taking into account patient’s safety first.

What amount of the body fat may be sucked out during surgery?
Maximum amount of sucked fat is 4 liters.

When could I travel home safely?

In most cases travelling home after 7-8 days post-operation is considered safe according to our clinic‘s  policy. The recovery will still take place until later though in your country of residence.